The Michigan Tech Archives is grateful to continue a strong partnership with the Friends of the Michigan Tech Library to sponsor the annual travel grant program. Two researchers, Dr. Matthew Liesch and Wesley Thompson, were delighted to have the opportunity to advance their research in the Copper Country.

Dr. Liesch concluded a multi-part research plan, which started in 2017 and culminated in June 2018. In addition to countless hours poring over photographs and historic documents pertaining to his “rephotography” project, Liesch shared his expertise in a travel grant presentation that took place on June 25, 2018. His talk, “Circling Lake Superior: Rephotography to Document Changing Landscapes of the Lake Superior Circle Tour,” guided the audience on a photographic journey to explore changing landscapes from throughout the Copper Country and the Lake Superior Circle Tour. The presentation featured historic landscape photography from the Archives, and supplemented those with other scenes along the route. For comparative purposes, Liesch rephotographed ordinary landscapes around Lake Superior during 2018.

Wesley Thompson was another new grant recipient this year and his research visit is slated for late October. Please see the FMTL wesbite or contact the archives for details on Thompson’s presentation, which will be taking place on Wednesday, October 24 at 4 p.m. in the library; please contact the Archives at copper@mtu.edu or (906) 487-2505.

With the generous support from the FMTL, the library hosted Dr. Brett Gary, Associate Professor of Media, Culture, and Communication at NYU, as speaker for Constitution Day. Every year federally-funded schools provide programming to honor Constitution and Citizenship Day and this year the library took the opportunity on September 13th to collaborate with the organizers of WW1CC to host both a talk as well as to celebrate the opening of the WW1CC festivities.  The WWI trench recreated on Michigan Tech’s campus invites visitors to explore and immerse themselves in the history.

Sue Collins, Associate Professor of Communication, Culture, and Media here at Michigan Tech and lead organizer for WW1CC, opened the evening with a few brief words welcoming everyone to the opening of WW1CC and to the library’s Constitution Day event. Dr. Gary then delivered a captivating talk to a full East Reading Room. His talk, entitled, “World War 1 Speech Catastrophes and the Postwar Struggle for Free Political and Sexual Speech” explored the history of the wartime crackdown on political dissent and sexual impurity, and the development of the parallel civil liberties traditions that emerged in the war’s aftermath.

Throughout the fall term there will be speakers, films, performances, and exhibits on campus and in the community that relate to the centennial of the end of World War I. The “World War I and the Copper Country” (WW1CC for short) project was conceived to help commemorate the end of WWI and explore the impact the “Great War” had on our area and university.

The program kicked off with a talk by Prof. Brett Gary (NYU) in the library on the curtailment of civil liberties during WWI in conjunction with Constitution Day (see the following article in this newsletter), and then kicked into full swing with a series of things: a full-scale reproduction section of a WWI front line firing trench at the corner of US-41 and MacInnes Drive that includes an audioscape of readings from soldier’s memoirs and poetry; a two-day symposium, “Armistice & Aftermath”, that featured two keynote speakers, Dr. James Morrow, Jr. (UGA) on “The African-American Experience in WWI” and Dr. Lynn Dumenil (Occidental College) on “Women and the Great War”; a concert by the Superior Symphony of the music of James Reese Europe, noted Harlem bandleader and composer who served with the African-American 369th Infantry; and Charlie Chaplin’s silent film, Shoulder Arms (1923) accompanied by a live (digital) Wurlitzer organ accompaniment played by organist Jay Warren of Chicago.

The symposium itself featured a day-long program of two dozen papers on WWI and its domestic impacts and features with speakers from the Copper Country, across the country, and as far away as Israel. A full digital Proceedings will be published on the library’s Digital Commons in November.

There will also be a WWI Relief Bazaar the last Sunday of October in Dee Stadium and a trench closing-in commemoration on Nov. 11, at 11am, the time, 100 years ago, when WWI ended.

See http://ww1cc.mtu.edu/ for more information on the whole semester of events, including the ongoing film series (Thursday nights), symposium program, links to the Proceedings, and two live Trench Cams!

The Friends of the Michigan Tech Library will hold their 2018 Annual Meeting on Thursday 25 October 2018 from 4:30-6:00p.m. The meeting will be held in the library, upstairs, in room 244 (near the bridge to Rekhi Hall). All members and the public are invited to attend, and refreshments will be served.

Along with a short business meeting, the Friends will welcome speaker Dr. Syd M.  Johnson from the Michigan Tech Department of Humanities. Prof. Johnson’s presentation will focus on her research interests in the intersection of law, political philosophy, and ethics, and how human rights and animal rights are entangled. Prof. Johnson is Associate Professor of Philosophy & Bioethics at Michigan Tech, coordinator of Michigan Tech’s Bioethics minor, and an affiliated Associate Professor of the Department of Kinesiology & Integrative Physiology.

Her most recent book is the co-authored text Chimpanzee Rights: The Philosophers’ Brief (Routledge, 2018).

The fall 2018 issue of the newsletter is now mailing to members’ mailboxes.

This summer we welcomed Angie Piccolo, a 2018 graduate of Western Washington University’s History – Archives and Records Management track. Angie tackled a tremendous amount of work considering she was only with the department for a few short weeks. Stepping into help on the reference during our busy summer season, Angie quickly became well-versed in all things archives reference, offering prompt and courteous service to dozens of long and short-term researchers. In addition, she tackled many important collections projects, including an inventory of several hundred university athletic publications, programs and yearbooks as well as accessioning many new donations. She was a great asset to our public services and behind-the-scenes work.

In addition to all the practical training the FMTL Archives Internship offers, Angie was also appreciative of the opportunity to explore the Copper Country. She had many adventures, including visits to the Keweenaw National Historical Park, the Finnish American Heritage Center, Quincy Mine, Eagle Harbor, and a farewell dinner at the Harbor Haus in Copper Harbor. Overall, the summer internship program continues to be an enriching experience, for interns and library staff alike!

The spring 2018 issue of the newsletter is now mailing to members’ mailboxes.

Through the hard work of our volunteers and the interest by the public, the FMTL 2018 Winter book sale raised nearly $800 for the library, even when the sale was rather quiet form 1-2pm as everyone was up by the SDC breaking a Guinness world record!! (unofficially at this moment, but we’re going to do it!)

Thanks to all who came out and found great books at great prices.  Don’t forget our annual sale on 6-7 April!

Given the wonderful snowpack in Dec. and Jan., Winter Carnival is shaping up to be a great one this year.  But don’t forget out book sale on Saturday from 11-4 as well! 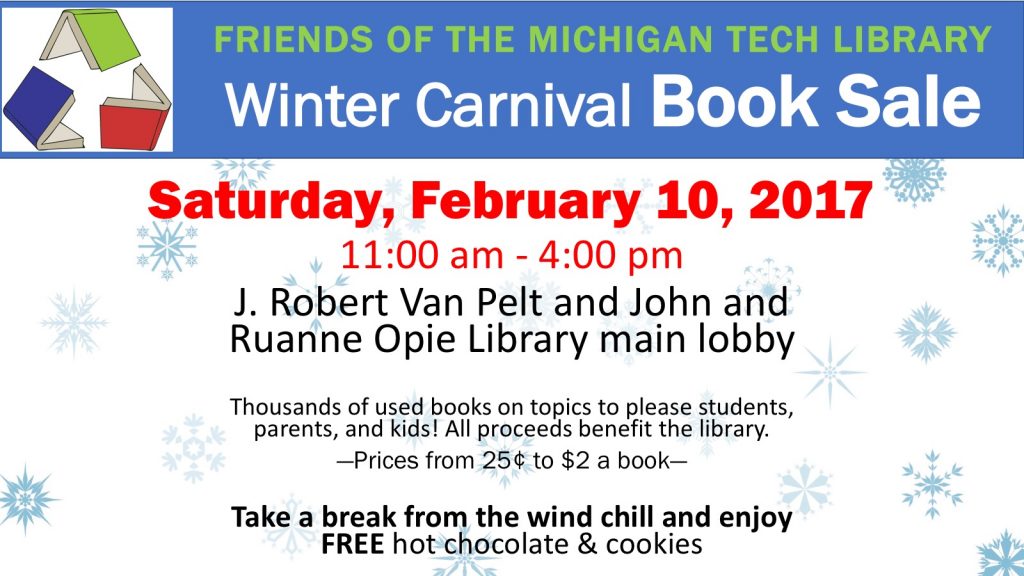 The fall 2017 issue of the newsletter is now in members’ mailboxes.